Chat with us, powered by LiveChat

If the towel/wiper/pad becomes too dirty, it will also begin to “streak”. It is then time to wash the towel. This is easily done by just throwing the towel, or any other microfiber cleaning product, into any washing machine and laundering with any soap or detergent you prefer. 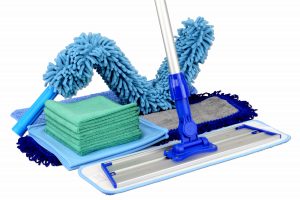 A word of caution here; experience tells me you should be careful of the additives in our detergent as they tend to build up in the microfiber, reducing its’ ability to perform as intended. The other restriction in the wash cycle is to NEVER use any type of FABRIC SOFTENER.

The towel will treat the fabric softener as if it was dirt. It will try to store the tiny particles of the softener in the towel fibers and may cause the towel to be less effective. The use of any POLISHES will result in the same issues.

Microfiber does not MOVE the dirt or dust. It actually tries to trap it, and this means a microfiber product will “fill up” periodically. This dirt and dust is released in water and soap. Soap helps release the greasy part of the build-up. If the fiber is being used with water, it must be rinsed and wrung out periodically for best performance.

Remember, the microfiber is trying to trap and remove dirt and dust, and it should not be used to mop a whole floor or clean a whole room. The skill comes with knowing when to change out or rinse out the microfiber tool. 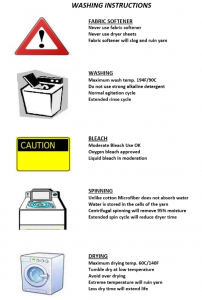 Click here to find points on the Healthy Cleaning Dashboard!

Have you used a mop bucket that actually works?  Or does your mopping tools just spread dirty water?  Have you ever been informed on what Microfiber is so that you can make an intelligent decision when you purchase these tools?

Here is your chance to learn for about Microfiber, what it is and how it works in regards to the cleaning industry.  The first 20 people to sign up get the FREE seats.  Everyone after that pays $30.

Come and be some of the first people to enjoy the newly remodeled A.C.E. Learning Center in Orlando.  Refreshments will be served.  Bring your Smart Device. Wifi is provided. 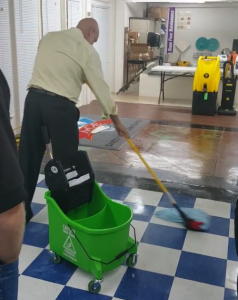 Register now for this FREE session in January

Here is a list of the topics we will cover in the class.

“To Say that a Building is Clean does NOT mean it is Healthy,

but if a Building is Healthy, it is CLEAN.”

Have you ever seen an ATP Meter and Swabs used to verify your cleaning results?  If you are in this class, you will!

Don’t miss this opportunity to learn the latest in healthy, positive and proactive methodologies for the cleaning industry.

Your instructor is David Thompson, host of “Beyond Clean with Dave” on the A.C.E. Network.

When it comes to the prevention of the spread of diseases the custodians are the first line and last line of defense. With 80 percent of infections being caused through direct contact there won’t be anything stopping these bacteria if the custodians aren’t equipped with the right tools. This doesn’t mean having to buy thousands of dollars worth of heavy duty equipment for your facility, but instead just to make sure not to cut corners on the cheaper things that you need to clean and disinfect your facility.

So do you want to be in a facility were the bacteria and soil is being spread around by cotton cloths or to ensure that the soil and bacteria is getting picked up through the use of Microfiber Cloths?

When cleaning with traditional cotton rags in most situations you will be picking up a good majority of bacteria, but this is only half the battle when it comes to cleaning and disinfecting. The true challenge is not to just remove the bacteria from a surface, but the soils from the surface as well to give the disinfecting chemicals a fighting chance according to Darrel Hicks, author of Infection Prevention for Dummies. Cotton rags while cheap and readily available, are not particularly good at picking up these soils off of surfaces which is one of the problems of using cotton rags.

Microfiber cloths on the other hand work by gently scrapping against the surface to help pull the soil and bacteria off of the surface. They then use their engineered pockets within their fabric to collect and trap the soil until the cloths are washed to prevent from spreading it across the surface. Making them extremely effective in preparing a surface to be disinfected.

Another problem that cotton cloths have is when you are using quat-based disinfectants. The cloths can have a strong attraction with the active ingredients in these quat disinfectants, which causes the cloths to spread the soil and bacteria rather than picking it up off the surface.

At The University of Minnesota Medical Center they tested the efficiency of both cloth and microfiber cloths, which led their decision to switch to microfiber.

The University found that Microfiber cloths will pick up spores and microorganisms even if you don’t use disinfectants were as cotton will just spread them across the surface. As well according to Amanda Guspiel, environmental infection preventionist since using these microfiber cloths they have not had any issues with quat binding that can occur with cotton rags.

Through changing to microfiber Guspiel has had a decrease in the number of Hospital acquired infections.

"The most valuable resourse an operation has is an engaged employee, let that be YOU!"